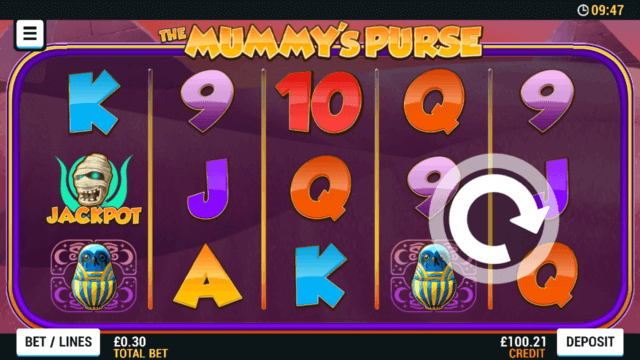 Enter your phone number and play on the go!

Enter your phone number and play on the go!

There’s fortunes to be found in ancient Egypt with The Mummy’s Purse, an exclusive online slots game by Mr Spin Online Casino. You’ve all heard the stories about pharaohs being buried with their worldly riches. Well it’s time to join Carter – our intrepid explorer – to discover if the tales are true! All while trying to avoid a mummy’s curse, instead leaving with the contents of their purse!

We don’t want you running home to your mummy saying that you feel left out of the exclusive slots action. That’s why Mr Spin’s made this game compatible with 99% of smartphones and tablets, what an absolute Giza.

So, do you sphinx you’ve got what it takes to grab The Mummy’s Purse? Enter ancient Egypt and see if you can wrap up a pharaohcious win!

Getting Started with The Mummy’s Purse

Fortunately, you won’t need to decipher hieroglyphics to play The Mummy’s Purse. Simply use the ‘+’ and ‘-‘ buttons within the ‘Bet/Lines’ menu to adjust the bet amount per line and number of win lines you want to play across. When you’re happy with the total bet amount – tap the spin button to begin.

The writing really is on the wall for your total bet amount, as it appears underneath the game’s reels. This amount is carved out by multiplying your bet-per-line with the number of win lines you have in play. So – for example – if you play 10p a line across all 15 win lines, you’ll have a total bet amount of £1.50.

Don’t feel like you need to be entombed with a particular total bet amount, you can adjust both the bet-per-line and number of win lines any way you see fit. Just be aware that the minimum bet-per-line is 2p, with the maximum increasing up to £20 a line.

You’ll be saying ‘ankh you very much’ when you realise that playing The Mummy’s Purse is as simple as setting the total bet amount and tapping the spin button, which will cause the reels to spin in at random.

The Nile might run from top to bottom but our win lines shake that trend, walking like an Egyptian – and paying out – from left to right. Just how many ancient symbols you need to line up to count a win depends on the icons you’re digging around for. Some pay out with two or more on an active line, while others need 3+ to count a win.

Talking of that famous river, we won’t be in de-nile if you do line up a win, we’ll even highlight the winning line on the game reels before adding the associated winnings to your account credit.

We don’t want to be Cleopatranising, but you’ll be feeling like an Egyptian God or Goddess yourself if you do line up a winning combination of symbols on an active line. That’s because you’ll win a multiplier of your original bet-per-line.

There’s no need to part a large body of water to find out information about reel wins. Just head on over to The Mummy’s Purse paytable, by tapping the menu button and then ‘Paytable’, to see how many symbols you need for each win, and how much each combination pays out.

If active lines have wins in common, we’ll add them up to give you a higher total win. Don’t think there’s a curse if you only see one win on each line, as only the highest win on each line can count.

You could be wrapping up a win from the cave of defeat if you line up a well-placed Wild symbol. That’s because Wild symbols substitute for all other symbols – except mini-game and Free Spin symbols.

That means, for instance, if you lined up two 9s next to a Wild symbol, you’ll be winning like an Egyptian with three 9s.

Just be careful! Our mummy won’t give up their purse holding the full progressive Mega Jackpot fund with a Wild on the Jackpot winning line.

Line up two or more symbols of our hapless explorer, Carter, and you’ll get to play Cash Crypt. This is an exciting mini-game that requires you to avoid the traps in a pharaoh’s crypt, in an attempt to Cairo away a massive multiplier of your original bet-per-line.

Once you’ve found yourself in the Cash Crypt, spin the numbered wheel to see how many steps along the bonus trail you’ll be taking.

You’ll be partying like it’s 1999(BC) when you realise that you’ll pick up every multiplier you walk across. Watch out for skull spaces though! They’ll either send a large ball rolling along the trail, knocking Carter flying, or release a mummy to chase Carter off! Either way, all skull spaces return you to the game reels with an accumulation of all of the multipliers you’ve traversed across up until that point.

It’s not just traps and multipliers buried in the tomb though. Land on a round portal space and you’ll enter a secret room where you can spin a Sacred Spinner to increase your bonus multiplier even further.

In any of these secret Sacred Spinner rooms, simply tap the spin button to set the bonus wheel going. Once spun the bonus wheel will stop at random, with the bonus amount you land on adding to your Cash Crypt trail bonus to give you a higher total mini-game win!

You’ll be scurrying your way to spins on the house if you line up 3, 4, or 5 Free Spin beetle symbols on an active line, as you’ll be adding 5, 7, or 9 spins to your purse, respectively.

These freebies will lock to the value of your last spin but they won’t cost you a penny. Once your free spins have run out, you’ll return to normal play, with spins once again coming from your account credit.

Raiding the final resting place of a centuries old emperor isn’t the only way to Carter off with free spins. If you’re a new player at Mr Spin you’ll grab a casino welcome bonus worth up to £3 without having to deposit a single penny! Play your bonus on one of Mr Spin’s amazing games, such as Reel Lucky Spins and Shrunken Trails, for as little as 0.06p per spin for up to 50 Free Spins* – no deposit needed! Sign up today without having to deposit a single penny!

Decide you like the exclusive slots offerings by the Emperor around here, Mr Spin? Well make your first deposit and he’ll match it up to 100% up to £100!**

When the Jackpot is won, it is reset and begins to rise again. Simultaneous wins can occur. If a player wins the progressive Mega Jackpot then a notification would occur BEFORE any other player was awarded the Jackpot. Any players in a game that contributes to that same Mega Jackpot will receive the on-screen notification of a reset the next time they press the spin button if it is within 10 minutes of the jackpot being won. Players will not be charged for the spin generating this notification.

In the event of a communication error after a progressive win result has been determined and before it has been displayed on screen, the win amount will automatically be transferred to the player’s account. While the game is live, the Jackpots cannot be terminated.

The Mummy’s Purse has a theoretical return to player of 94.30%. This is based on long term playback. System malfunctions void all payments.

18+. Up to 50% deposit match bonus of friend's first deposit received when the referred friend has played through their first deposit of £3. Bonus value decided by lobby game. Bonus credit can be used in any game, Max Bonus £100. An additional bonus of up to £7 will be provided via lobby game when friend registers. 40x wagering requirement. 3 day expiry. £50 Max withdrawal from bonus win. Withdrawal of deposit excludes player. You can refer up to 6 friends every month. T&Cs apply. BeGambleAware.org

Add Mr Spin to your home screen for easy access

Add us to Home Screen for best gaming experience.